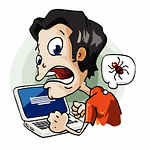 There seems to be a lack of understanding on most people’s part when it comes to the impact of cybercrime.   Cybercrime has changed in the last three years.   There is now a lot of crossover between the digital world and the real world.   The lines between the two are becoming more and more blurred. And this means more and more opportunity for cybercrime to affect your life.

The criminals who use the internet are not just conducting white-collar crime.   Most people believe having their credit card information stolen is not the end of the world, just a minor inconvenience—the bank will cover any losses.   For an individual this is true, but I wouldn’t apply that criterion to a business account.

I would suggest that you read the terms and conditions of your business financial account to find out what happens if that account is compromised.   There are some banks in the world that only allow you 24 hours to report the compromise; after that you are not covered. It often takes businesses more than a day just to realize they have been hacked.

Furthermore, it’s not just account information or other PII that hackers can steal. We are starting to see a crossover between high-end technology and low-level thefts.   For example, there is an application that can be downloaded for iPhone or Android that will allow a criminal to photograph your keys.   Two or more photographs of a key can be used to create an exact three-dimensional image of that key.  This image can then be transferred to a 3D printer. Voila, access to your office or home.   No more picking locks or breaking windows.   Just a little legwork and they have access to your castle.

Another trick is a combination of two new technologies:   Google Glass and PayPass.

Criminals now use Google Glass to track fingerprint movements relative to the position on the touch screen to determine pins and passwords from up to three metres away. This can be done at an ATM.   Combine this with a PayPass scanner—an easy-to-obtain device that downloads the information from your “contactless” PayPass or payWave credit card—and you have just lost the keys to your treasury.

We have all been told to never right down your pin number; another protection measure is to ensure that your chip based credit cards are protected by a wallet or container that does not allow them to be scanned unless you want them to be scanned.

Paranoia: I have repeatedly said that this is one of your best defences against cybercrime, and I will continue to say it.  Yes, technological components are important, but they’re not enough. If you exercise common sense, question everything, and never let your personal defences down, then you have a much better chance of saving your ass.