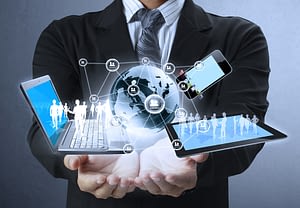 We have all heard the catch phrase “the internet of things”. It is part of the big data revolution that big businesses are starting to use to understand the human animal. The old saying that one person is smart but a group of people are stupid is relatively true, according to recent big data analysis.

Isaac Asimov’s foundation series was based on the ability of scientists to predict the future using their version of big data.   Their scientists predicted a great failure across the galaxy and instead of civilisation being destroyed for thousands of years their use of Big Data and strategic positioning meant it would only have a dark period of 1,000 years.

Statistics have shown that it is difficult to predict how a single person will act, but that with the right information and knowledge we can predict how a group of people will react to a certain stimulus or what they will do in a certain situation—no longer just in science fiction!

I am concerned about the internet of things, because in an overly connected world two important things are lacking–security and privacy.

Where is the security? In the rush to get all of our “things” connected and talking to each other, we have forgotten to consider basics like security within the digital world. In my field we have a saying: “There are two types of people–the ones who have been compromised, and the ones that do not know they have been compromised.”

Access to big data creates a new level of criminal activity, as internet aware systems become new targets. We have already seen refrigerators sending out email and air conditioners being transformed into listening devices. You just gotta love the future!

For most developers and large organisations, getting a product to market, before the competition does so first, is critical. A delay at the manufacturing level simply because the operating system is insecure, is unlikely to happen. The product will be released as soon as possible, and it will be patched when the first system gets compromised. How you patch a refrigerator remains to be seen!

There are currently no stringent tests to secure operating systems. The operating system could be 10 years old and riddled with flaws, but it will go into production and be marketed to the public as the next best TV, refrigerator or air conditioner, loaded with convenient “extras.”

The lack of privacy is another concern. The desire for increased convenience is driven by both users and manufacturers. When a device has the ability to connect to the internet, all information generated by the users of the device can be sent back to the manufacturer. Sound like big brother at all?!

Until the issues of security and privacy are addressed, with regard to the internet of things, my advice as always – treat them all with Paranoia and always use common sense.