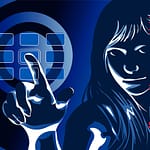 But one of the movie’s gadgets isn’t so far-fetched—a surgically implanted phone embedded in the palm of your hand.

The movie’s super-spy characters can make calls just by holding a palm up to their ear.

The human hand isn’t equipped with a screen, but that’s no problem—just hold your hand up to any piece of glass and it transform into a temporary screen for you to use.

Sure, it’s just a movie, but it’s also giving us a look at the next version of wearable tech—after all, we already have cell phone wristwatches.

And while all this advanced technology might seem pretty appealing, I can see some downsides.

First of all, it could get very annoying, very fast. It’s bad enough at the moment—get on any public transport system and you will always have someone talking loudly into their phone, listening to loud music or playing the latest game, complete with sound effects.

Now imagine if everyone is using the train windows as a screen to message their mate. This could take TMI to a new level.

Our devices getting smaller and smaller all the time. It may seem like there’s nowhere left for gadgets to go except inside the body.

Tech implants may seem like the inevitable next step —a new meaning for “bleeding edge” technology. But when wearable tech wears off as another fad, where will we be?

If those Total Recall palm phones were real, the characters would be stuck with the old model after a couple of years—just like we are, except they’d have to undergo surgery just to stay up to date.

This show claims to offer a window into the next few decades of scientific advances.

Some of the breakthrough ideas, like lightweight silk skin Armour and bio printing new organs, are intriguing.

Others are downright scary.

One episode discussed corneal implants that could connect our brains to the internet.

Looking up information would be effortless, but these implants would also make it possible for corporations or real-life thought police to scan the contents of our brains.

The possibility is mind boggling, never mind scary. Most people can’t even handle a Facebook account without over sharing.

To tell you the truth it is getting pretty frightening where technology is headed, without the added problems of human stupidity.

I don’t mind research and development, and I have no problem with innovation.

What I do have a problem with is building technology on unethical or downright dangerous research.

When that happens, the almighty dollar takes over and to hell with the rest of the world.

The technology companies are always looking for that next best thing.

Tech implants might seem to be the next step, but are they?

The device that’s fun to watch on the big screen might not be so fun to wear under your skin or inside your brain.