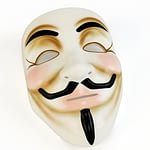 The internet has been around since the 80’s. When it was first created, almost no one had an inkling of the way the digital world would drive the real world. The internet was just a few nerds arguing about Doctor Who on primitive message boards—or at least, that’s how most people saw it.

Well, thirty years ago a few science fiction writers like William Gibson thinkers did envision something like this new world. In their “cyberpunk” novels, they wrote about a near-future Earth in which hackers wage high-tech battles against artificial intelligences and mega corporations.

These writers had an understanding of how the criminal world would take control of the internet and make it very dangerous for normal people to operate. In Gibson’s Neuromancer, main character Henry Case is a former member of a hacker gang that made big money stealing from others in the online “Matrix.”

Other examples of the science fiction writers predicting today’s world are the matrix, machines taking over the world, or Johnny Mnemonic where a data courier, literally carrying a data package inside his head, must deliver it before he dies.   Then there is the whole world of Shadowrun, take away the magic and we are looking at the world and what to expect in 20 years’ time.

Fast forward to today’s world, and it is not very different from what was envisioned by those who wrote about it 30 years ago.   The real-life problems associated with the digital world are profound and scary—and while people are starting to notice the scope of the problem, no one wants to take responsibility.

We have cybercrime law enforcement, but it is toothless and concentrating only on the “big picture.” Police focus on the big fish, the criminal masterminds who are driving the gangs.   Anything under $100K or having an impact on children is not worth the effort, so there is NO effort. And that leaves ordinary users with no protection.

Sure, we have antivirus software and other technological solutions, but that hasn’t stopped criminals from running rampant. The anti-virus companies say that they are fighting a losing battle to protect end users.

It is the new Wild West, with everyone doing their own thing, whether it’s running a scam, trying to protect others, or simply trying to get by. Law enforcement can only protect their own little area. We need a digital Wyatt Earp, a posse, bigger guns.

Or maybe we don’t need a new saviour. We need to use our God-given human capabilities and gift of intelligence to protect ourselves.

There are two human qualities that we can use that will have a huge impact on our protection:   common sense and paranoia.

Just using those two human “senses” decreases your chance of losing everything you have worked so hard for.   Whenever you are using a digital device, use common sense and be paranoid.   The world outside your window may look bright and cheerful, but inside the online “matrix,” it’s a dark and scary place.