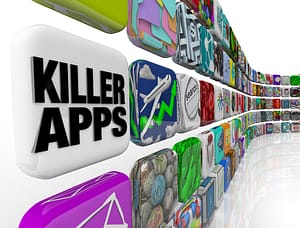 In the good old days of software development there was a very restrictive and at times, very antiquated process of how software was developed, packaged and sold to the public.   In that period, about 1990 – 2005, software was handled by the software giants – Microsoft, Apple and Adobe.

They also had very regimented ways to develop the software packages that they were producing.   New features were incorporated into the next reincarnation of the product.   In addition to this there was also very rigid version control on the software being created.

Let’s fast forward to today, the giants are still in place and producing software for the masses but they are being usurped by the apps crowd.   Although Apple and Microsoft still have phenomenal control over software going to be used on their operating systems there is a proliferation of other apps that have less control.

The push by Google (android) for everyone to get involved is driving this boom.   Google, who’s philosophy seems to be get it to 80% then release it and get the Android community to complete the project, is one of the major driving forces behind this state of affairs.

With the android system, you can come up with an idea, download a development app, build your idea into an app and then sell it on Android marketplace without having any knowledge of programming and logic.   What we, the punter, ends up with is usually is an app that freezes, the tablet, doesn’t do what you want and has cost you money.

By creating an app, building a reputation, and making money is now the largest driving forces of the app craze.   Don’t get me wrong there are some very reputable developers out there and they are not all shonky and underhanded.   But 100 hours of development, a viral marketing plan and a low cost app you can generate $100,000 in a week is a great incentive for most developers.

You see in today’s software development world the apps are no longer built to a standard.   This standard gave us the expectation that when we purchase it it will do what we expect and will not damage or create problems for the underlying operating system.   This expectation is how the developers are exploiting the business world.